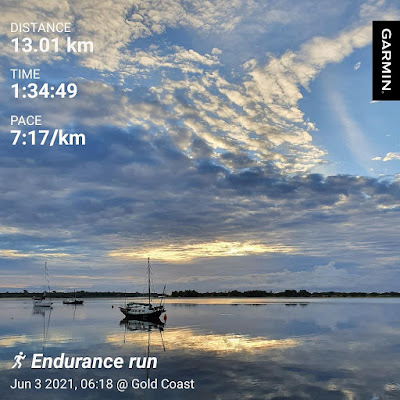 June started with a long run broken up in two parts: 13k in the morning in Southport, and 12.2k in the afternoon in Carrara (that was supposed to be 13 as well, but at 12.2 I was back home and it was dark, and I couldn't be bothered to run another 0.8k). That was the first time I ran twice in one day. My legs were very tired! 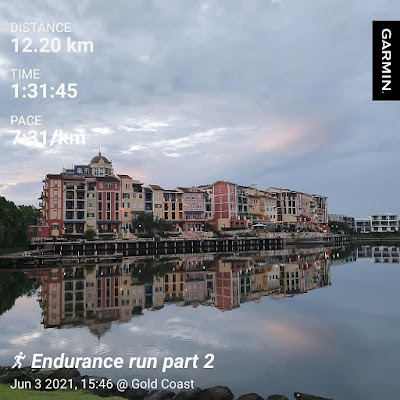 On Saturday June 5th I volunteered as barcode scanner at my home parkrun Surfers Paradise, because the next day I was running the Brisbane Half Marathon. More about that in this post! 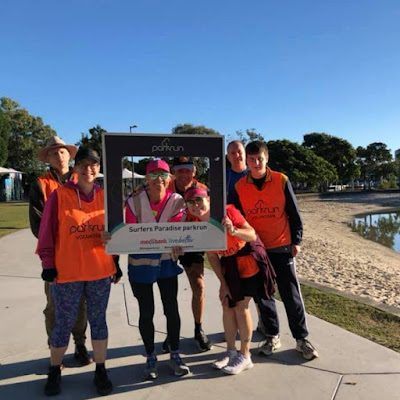 The first run after the half marathon was on the 9th of June. It was a dreary day and not a great run - I guess they can't all be winners... 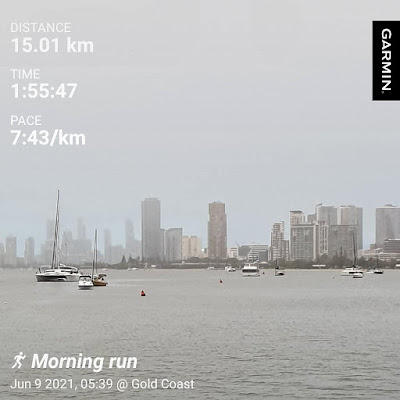 On Saturday I did another 'long run with parkrun in the middle' (15k in total), and on Monday it was time for an interval session: 9 x 600m in the Botanic Gardens, on a cold but sunny morning. 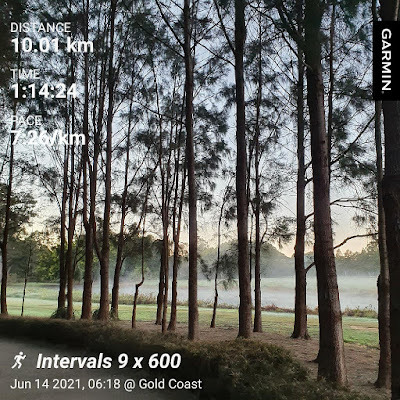 And then, two days later, it was time for my longest run ever, and the longest run in the lead up to the Gold Coast Marathon: 30k! It went quite well, but it did leave me wondering how I will run those extra 12.2k on marathon day... 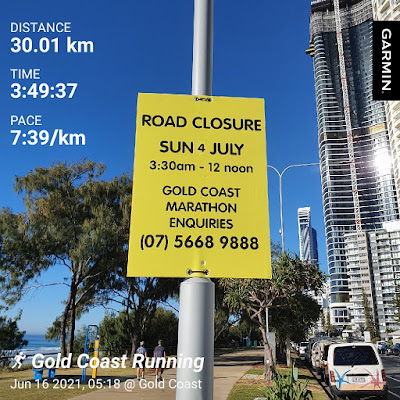 The next Saturday was another 'long slow run with parkrun in the middle'. I ran parkrun with my friend Mandy and had a coffee with her afterwards, before running back home. I am getting over those long runs a bit... 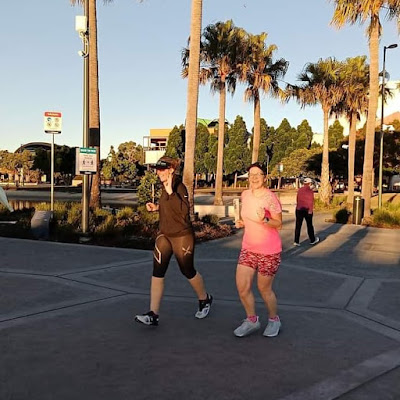 On Monday I did long intervals (2 x 2.5k) in Soutport and captured the sunrise in the windows of the Aquatic Centre: 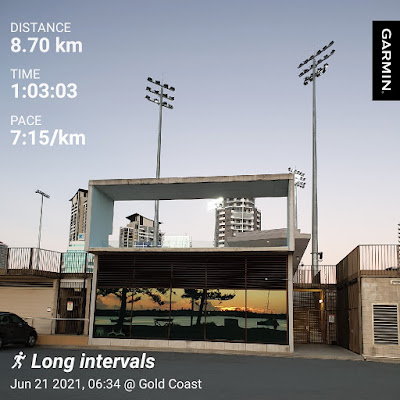 On Wednesday I really, really did not want to get out of bed and do a 12k run... But of course I did get up and drove to Main Beach - and I was so glad I did, because on my run I witnessed one of the most beautiful sunsrises I have ever seen: 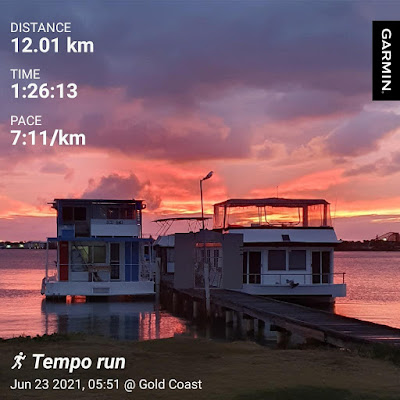 I stopped and paused my watch to take some photos. I sent a few to the ABC and was thrilled when one of them appeared on the seven o'clock news that night! 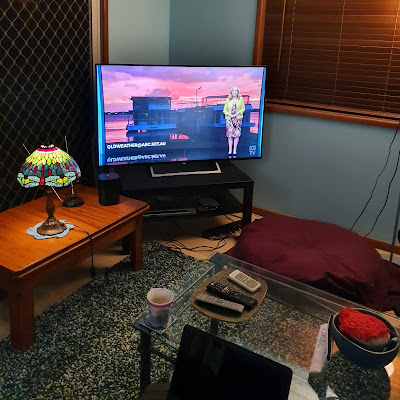 We spent the weekend in Caloundra and on Saturday did Kawana parkrun, a beautiful out-and-back course near the ocean. It was my 110th parkrun, I ran it in 31:59. 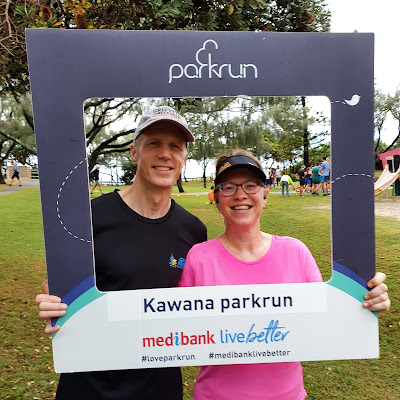 The next day, one week before the Gold Coast Marathon, I did my last long run in Caloundra. It was a lovely morning, I took it easy and really enjoyed my beautiful surroundings. 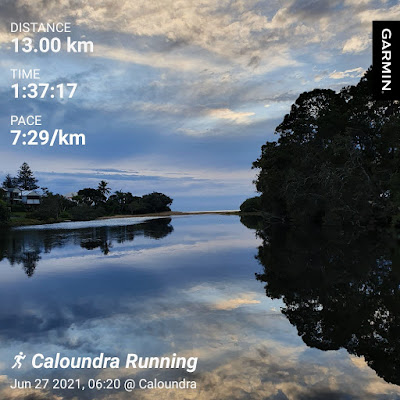 Meanwhile on Saturday Sydney had gone into lockdown because of a Covid cluster, and we anxiously followed the news to hear what would happen in Queensland. What we feared did happen: on Tuesday morning it was announced that Southeast Queensland, including the Gold Coast, would go into lockdown at 6pm, and later that day the dreaded news came... 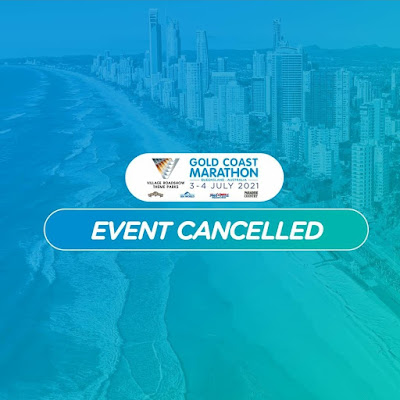 We were expecting it, but of course it was still devastating. 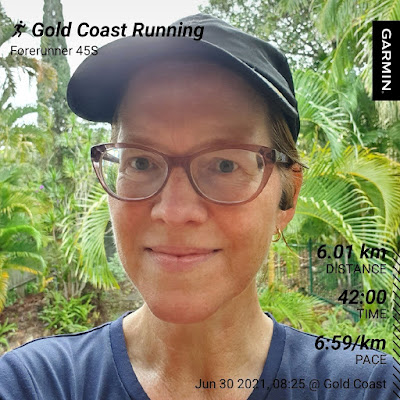 However, the next morning I decided to do what was supposed to be my last run before the marathon. Only 6k, I just ran near our house and took it fairly easy. Afterwards I felt much better - this is what I wrote in my Instagram post:

This was supposed to be my last run before the marathon, but sadly we are now in lockdown and the Gold Coast Marathon has been cancelled

Even though I had expected it to happen, I was devastated yesterday. But today I still enjoyed my run.

I'm fitter than I have ever been before, I ran a half marathon PB a few weeks ago, and there will be another marathon some day (maybe the Sunshine Coast Marathon in August?)
I'm just grateful that I'm healthy and that I get to run in this beautiful place, even during a lockdown

That night hubby and I decided to run the Sunshine Coast Marathon and I entered us both: 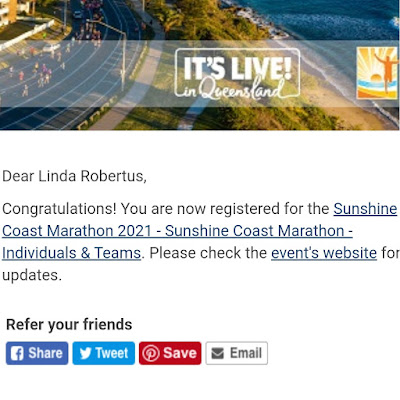